Located near a seafood restaurant in southeast Bali, Indonesia. 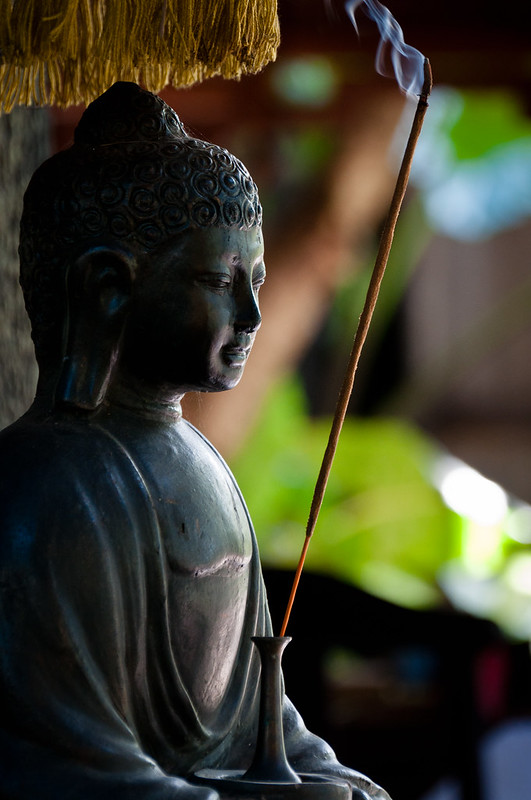 These two Buddha statues are in Changhua at the Big Buddha of Baguashan. The statue to the left is this Buddha, which sits on top of a lotus leaf and is large enough to enter. The entire complex is seated on top of a mountain overlooking the city.

While I’ve posted about Wat Pho before, I wanted to share some more of these golden Buddhas at the temple. I actually took a second chance to visit the temple and take photos as the complex itself is huge. The second time, I played around with depth of field and took my time in the hallways which connect the main buildings.

As Yuling and I gear up to head to Cambodia and Thailand, I’ve decided to organize a section of images on this site that take place outside of Taiwan. The “Josh in Hong Kong” section above will soon be changing to a more general title and will link to our coming adventures in southeast Asia.

With this decision, I decided to go back and reprocess some of the images that I had from the last trip to HK. Starting off is another look at the famous Hong Kong skyline, seen originally in many images in this post. Saving RAW files is a lifesaver when it comes to making progress with my postprocessing. I’m very happy that I’ve got nearly every shot I’ve taken backed upon on an external hard drive.

Next off is a second attempt at the famous Tian Tan Giant Buddha. I took many images of this statue while visiting the first time and also followed up with a second post not too long ago. I prefer this version over the others as it uses contrast and color a bit better than my attempts beforehand.

The rest of the images are some leftover from the streets – the first two from Central District and the last from near Tsim Tsa Tshui, Kowloon.

This image is from nearly a year ago. As I’m hoping to get out of Taiwan for a few weeks this summer, I’ll have another post outside of Taiwan coming up in the near future, I hope. I’m looking at flying to Thailand in July. I would LOVE to do a Thailand-Cambodia trip, but a mix between Yuling’s preferences and the amount of time we have might constrict us. Oh, and I might be stopping in the Philippines, so I’ll wave hello to Odee!

Anyway, I was thinking about my photography when looking at this shot. It was taken with my then newly-purchased 70-300mm VR. This has been a great lens for me and got me into some bird/wildlife photography and gave me a closer look at shows. Unfortunately, the aperture is f/4.5-5.6, but it works fine for daylight shooting.

I like the image in that it’s pretty simple. The Buddha is a “giant” Buddha (see more images here) and is a massive sight to behold – yet quite touristy.

With that said, I was looking at what could’ve been done better. Processing sticks out as an issue. My shadows have little contrast and the top of the head is blown out by the sun. The sky gives an awkward range of colors and there could be more detail in the bronze of the statue.

On top of that, a giant shadow covers the face. While I can’t reshoot, it’s good to keep in mind for next time.

Well, I’ve already missed my first day.  I completely FORGOT about this whole thing yesterday after work and instead of getting out my camera, took out my laptop where I played Civilization IV to kill some time and relax after work.  The moral of the story? Civ IV kills photo sessions.

I won’t include photos that have already been posted here, namely the woman in Wulai and a wide-angle view of dancing students.

The first one, though, is a recent favorite. It was taken at Bao-an Temple, near Confucius Temple in Taipei. I used a “film” style filter in Aperture 3 and tweaked things so the door would stand out.  I liked the symmetry and even though it’s not perfectly in focus, I like how it turned out.  I took this on 02-28, when visiting Taipei.

The second two come from some experimentation. When I first started my adventures in photography, I used an apartment Buddha – a gift from a relative – as a muse for playing with depth of field, lighting, and composition.  He ended up in a post at one point, even, and I ended up taking him from Houston to Taiwan.

This first image is with the 35mm set to f/1.8 to give a shallower depth of field.  I liked how the curtains blurred out and the effect this gave.  This was the work done on 03-01, though I did take some other photos that day outside.

My second image comes from a tiny makeshift “studio” I was experimenting with to learn more about light on Wednesday, 03-02.  I took a single A4 piece of paper and set it up on a wall to give him the “floating” look.

Some more images from that shoot follow.  I liked the more dramatic light created without a diffuser of any sort, but was also playing around with my diffuser to see how much it affects the image.  Turns out it does quite a bit.

Oh, and no excuses this weekend! I hope to get something created Friday (today) and DEFINITELY will have material tomorrow and Sunday.

These are from a short visit to City God Temple, a main cultural/religious point in Hsinchu City.  There’s a market right in front of the temple which has some great food and it’s always full of activity.

These were taken last weekend while visiting a monastery near the Lion’s Head Mountain site.  This temple is under construction and a massive Buddha statue has been erected.  This is not the first time I’ve seen a “Giant Buddha” (see this Hong Kong version) but this one was quite impressive.  We managed to be treated to a nice sunset, too – perfect for some HDR shots.

Now that I’ve been weaning myself off of HDR all the time, though, I’m not sure if I like these!  The second one had a crane taken out in Photoshop CS5 – mostly just because I can and wanted to practice my skills doing it.  See if you can see any lighting inconsistencies – I’m sure they exist!

This is ACTUALLY the last Hong Kong post… these photos come from Po Lin Monastery, which is located right next to the Tian Tan Buddha.

The monastery was interestingly void of most foreign tourists, as I was the only non-Asian I noticed inside the actual temple complex.  In what I noticed as a Hong Kong fashion for temples, there was a place to grab a bite at a vegetarian restaurant – which I’m guessing is directly connected to the temple as opposed to the Starbucks and Subway less than a kilometer away.

One of the first things I noticed were these GIANT incense sticks.  Yuling actually took one and compared it – they were bigger than her arm… while she doesn’t have huge arms, this is still impressive for an incense stick.  If I remember right, they were for sale for about $35 USD, which makes the following photo NOT cheap for the people who placed these…

As you may/may not have noticed through my photos, I’ve always been intrigued by this temple incense.  It really draws you in to this world that is outside the hustle and bustle of daily life and more focused.  I have visited a lot of temples between here and the US, and I can’t count how many people I’ve accidentally run into who were carrying this around some altar.  Something about it fascinates me as being very similar – but very different – from the Christianity I know.

In addition, they provide the perfect subject for a photographer – something still yet moving… something you can focus on… something that is both not too colorful and full of character.  You’ll see more of these in my blog.

On day 3 of the Hong Kong trip, Yuling and I spent some time for the first half of the day visiting Ngong Ping, home of a famous “giant” Buddha, the Tian Tan Buddha I mentioned earlier.

The day started off with a cable car ride, which I refrained from shooting because I’m a stickler when it comes to getting the best shot with my lens.  The way I figured, why would I take a picture out of some plexiglass that will ruin the quality of my (expensive) camera lens?  Anyway, I did get this photo of these water droplets from condensation…

…interestingly, the place was a sort of Buddhist Disney World for the first part – as another blogger has mentioned.  On one hand, I saw this as unfortunate… but then again, kind of fascinating.  There were mascots (some kind of monkey thing) but no costumed performers.  The entire area was new – the “village” of shops and Western and Asian restaurants reeked of being manufactured while the statue itself was only completed in 1993.

Nonetheless, it was all a fascinating experience… after climbing 200+ steps, the visitor is introduced to quite a few sights.

The above is an HDR of some statues built to worship the giant Buddha.  All are also bronze and each has a different offering… I counted four of them, if I in fact remember correctly…

The above is a single-exposure of the view to the north… at the back side of the seated Buddha.

This was set up along the stairs to perhaps represent a pagoda or Joss chimney.  I thought it made a good contrast with the background.

If you look closely here, you can see the cable cars to the top left.

I’m not sure what kind of plant this is, but it does show the power of my new 70-300mm lens, as I was quite far away from the flower.

The last photo here shows this location as a great spot to put this Buddha.  Hong Kong’s mountains have this intermittent haze that really makes the place seem otherworldly – especially with a 150-foot Buddha seated on top of a mountain.